Hey, everyone. Today I want to share reviews of two short stories written by Jan Sikes. Though they are completely different genres, both are highly enjoyable. 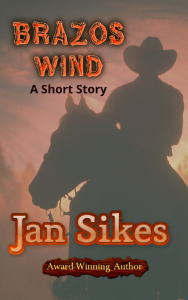 War-torn drifter, Jack McClean is left with nothing but bad memories, scars, and a restless soul. When he stumbles upon a burning homestead, and an unconscious woman, beside the Clear Fork of the Brazos River, he stops to render aid. Grieving widow, Savannah Logan, sees no reason to live, and only wants to join her husband and children in their graves. But, Jack refuses to let her die. In saving her, he might somehow find redemption for himself and hope for a new tomorrow. Is it possible that both Jack and Savannah can find a new destiny in the changeable flow of the Brazos wind?

Fifteen years after the Civil War, Jack McClean is still searching for a place to settle. One day, on the Clear Fork of the Brazos River, he comes across the burned-out house of Savannah Logan and stops to render aid.

Savannah sees no reason to live, having lost her husband and two children. But Jack takes her into the nearby town of Albany, where he finds lodging and medical care for her.

Both Jack and Savannah are haunted by the past, but can they find redemption in the Brazos Wind?

I thoroughly enjoyed this short read. Set in Texas, I’m familiar with the places. I would love to see more of these characters in a longer book, and the author left it open for the possibility. 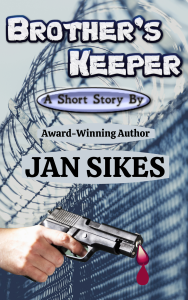 Quentin Marks’ mother can only love one son, and from the day Rowdy was born, she makes Quentin, his little brother’s keeper. She demands that Quentin fix every problem for Rowdy and that he also protect him. The truth is, after a deadly snakebite, Quentin owes his very life to his little brother, a debt that will never be paid in full. Only now a man is dead, and once again, their mother calls on Quentin to make the problem go away and save Rowdy from prison. When is enough enough, and how much of his own life will Quentin Marks have to sacrifice?

Brother’s Keeper is the story of two brothers – Quentin and Rowdy.

After Rowdy saved his life years earlier, Quentin believes it’s his duty to protect his younger brother. Their mother was responsible for this belief and insisted Quentin take on the role of Rowdy’s keeper from the day he was born.

But Rowdy is spoiled and often gets into trouble. One day, he makes a colossal mistake, and Quentin ends up paying a high price. How far will he go to protect Rowdy?

The story is short but well-written. The author did a remarkable job of developing the characters. It was as easy to love Quentin as it was to hate the mother. Five stars for this one.