Happy 2020 everyone. It’s a new year and a new decade. I intended to write a year-end post earlier in the week, but unfortunately, both my husband and I are recovering from the flu. Not an ideal way to begin a new year and both of us had the flu shot. So, this post is a combo of reflecting back and looking forward.

All in all, 2019 was a much better year for me than in 2018. I was glad to get that one behind me as it seemed there was one thing after another—car problems, changes at my job, and health issues for both my husband and me—to name a few. But even ending 2019 with illness, it was a good one. 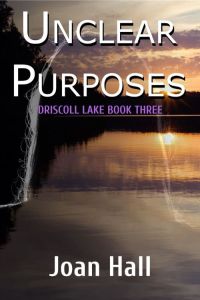 Writing-wise, I had a productive year, although I only published one novel. Unclear Purposes, the third and final book of my Driscoll Lake Series, was published in late May.

I began keeping a word count of everything I wrote last year—novels, short stories, blog posts, and even book reviews. Although some of the things I wrote will likely not see the light of day, the word count made me realize what I can do. I finished the year with 228K words. That’s more than three novels!

Beginning in August, I began blogging regularly and learned I could blog every day. I started regular features including Mystery Monday, WIP Wednesdays, and Thursday Thoughts. Because of my commitment to NaNoWriMo, I took the month of November off from blogging and most social media outlets. Due to various reasons, December was also a sporadic month.

Speaking of NaNoWriMo, I made the goal of writing at least 50K words on a new project. I still have about 25K words to go, but that I’ve never completed two-thirds of a novel in a month before.

In addition to writing, I also read more in 2019. I set a Goodreads challenge of twenty books and finished out the year with thirty.

I don’t make new year’s resolutions, but I do try to set goals. This is what I hope to accomplish in 2020:

In regards to blogging, I plan to continue Mystery Mondays. Tuesdays are set aside for book reviews and/or guest posts. Next week I’ll pick up with my Friday links posts. I probably won’t do WIP Wednesdays every week, but will post this feature at least monthly.

I’ll also continue Thursday Thoughts, but as with Wednesdays, I probably won’t post each week. One lesson learned in 2019 is the importance of finding balance. Writing is a priority for me, but I still hold a full-time job. I have some ongoing health issues that I need to see to (nothing serious), and more importantly, is to make time for family and friends.

I’m a natural introvert, and it would be easy for me to hibernate in my house and hide behind the computer screen. That’s not good. Everyone needs a break from writing and social media. It’s also important not to forget to enjoy being around those you love and care for.

So, there you have it. My goals for 2020. What about you? Please share in the comments.