Two weeks ago, I wrote how a song inspired the opening scene of my upcoming release, Unclear Purposes, the third and final book of the Driscoll Lake Series.

The expected release date is May 28 with AIW Press. Today, I’m excited to bring you the cover reveal. 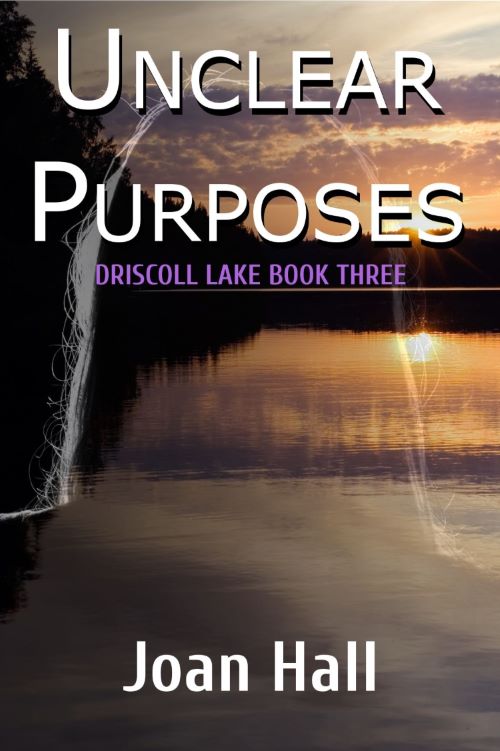 If you’re familiar with the other books of the series, you’ll notice the same theme – a lake for the background and a silhouette image of the main character. I’m pretty excited about this one.

So without further ado, here is the blurb:

Some people take secrets to the grave…

Three years after her husband’s murder, Christine Lawrence still struggles for balance. She has a rewarding career and a close circle of friends but feels oddly unfulfilled. Worse, the close relationship she once had with her teenage daughter has grown increasingly strained.

Former FBI agent, Vince Green, is battling demons of his own—painful secrets that drove him from Driscoll Lake. Newly resettled in the small town, he makes his living as a private investigator.

When Vince and Christine cross paths, stumbling over the body of a murder victim, he’s forced to confront memories he thought long buried. The circumstances surrounding the killing are eerily similar to a victim from his past.

As the body count continues to rise, Christine finds herself drawn to Vince. With a murderer stalking the streets of Driscoll Lake, neither is aware the killer has targeted her as the next victim—or that Vince’s past is key to unmasking a disturbed and deadly killer.

Look for more information as the release date draws closer. And if you haven’t read the first two books of the series, the eBook version of Unseen Motives is on sale this month for only .99. You can pick up a copy of Unknown Reasons for 1.99.

A special thanks to those who are helping to spread the word.