Hey everyone! I’m delighted to have back friend and fellow writing C. S. Boyack today. He has a brand new release, Laternfish and is here to talk about it. Take it away, Craig! 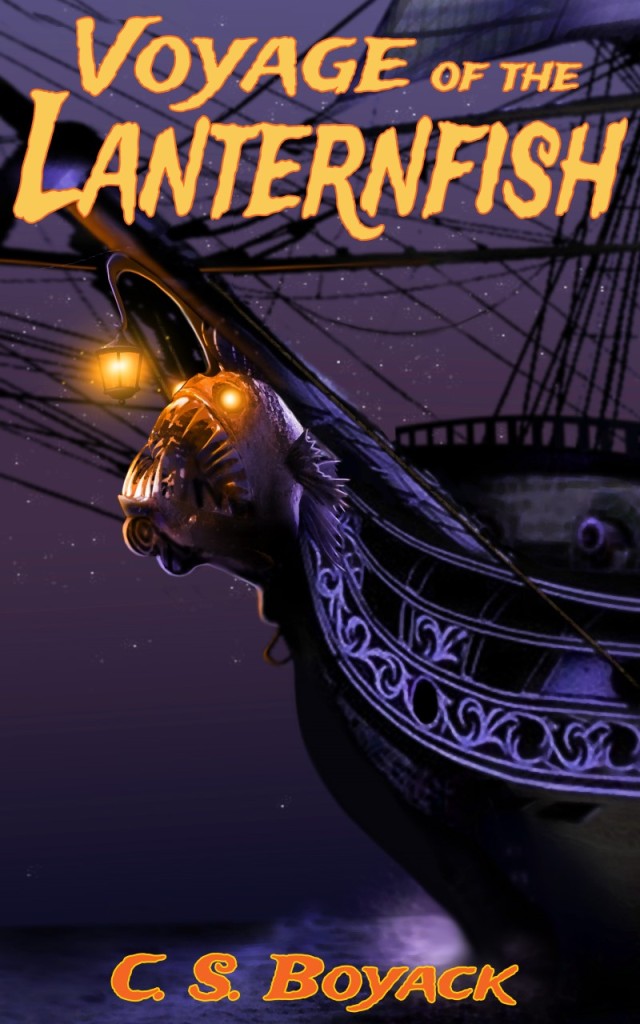 Thanks for inviting me back, Joan. I’m here promoting my newest book, Voyage of the Lanternfish. Lanternfish is a pirate fantasy. It differs from classic fantasy, because gunpowder is involved. There are still plenty of monsters to go around, along with magic, like any other fantasy.

Excerpts are a standard inclusion on a blog tour, and that’s what I’m providing today. You might consider this one the “call to adventure.”

To set the scene, the characters were enjoying a nice night out. Something went terribly wrong, and this is where we’re joining them.

Throbbing pain coursed through James’ entire body. The cold from a hard surface underneath chilled him, so he tried to curl into a ball. Heavy iron shackles prevented him from moving his legs.

“Thank God you’re alright.” She smothered him with a hug. “I thought they’d killed you.”

“Where are we going?”

“Think. We aren’t headed west or we’d be in the sea. That leaves up the coast, down the coast, or inland. What do you know?”

“How far from town?”

“They didn’t hit me. It was maybe as long as it takes to make a pot of tea.”

“That eliminates down the coast.”

“What else do you know?”

“They sound like soldiers. I can’t hear everything they say, but there seems to be someone giving orders.”

“Is that good?” Bonnie asked.

“Press gangs. We’re probably going up the coast to Maldron, to be sold to the merchant cartel.”

“No. Not you. Your fate will be worse than ours.”

“But you know the merchant captains. Maybe you can explain what happened,” Dan said.

“I can try, but it might not help. Something still isn’t right. Crimpers would fill this wagon to suffocation before they went back.”

“Maybe we’re just the first ones,” Dan said. “Maybe they’re going to visit some of the farms to catch some slaves.”

“Not likely. The magistrate would make them pay for slaves as property of the farmers. Keep listening. I can barely raise my head, and I think I’m about to collapse again.”

James faded in and out several times.

Dan banged on the wall of the wagon. “Oi! You out there. Lady has to pee.”

“Tell her to go ahead,” a rough voice answered. Laughter followed.

The wagon came to a halt. Someone fiddled with a lock on the door, then the sound of a chain dragging preceded the opening of the door.

One of the Hollish soldiers stood beside the open door. “Out. All of you.” Two more soldiers pointed their muskets at them.

Dan and Bonnie stepped out of the wagon and rubbed their eyes in the predawn light. James crawled to the door then swooned. The man who opened the door grabbed him by the collar then dragged him out, dropping him in the road with a thud.

The riflemen aimed at Dan. “You. On the ground, face down.”

Dan complied, and the riflemen stuck bayonets against his back. A man on a bay horse rode around the far side of the wagon. Obviously in charge, he said, “Miss Philson, feel free to go into the woods and relieve yourself. Remember, if you fail to return, he gets the bayonet. Terrible way to die if you ask me.”

James struggled to even crawl and his irons tangled in the weeds alongside the road.

“You there. Same thing. Take a piss then get back in the wagon. No shenanigans or your friend pays for it.”

When James raised his head again, his left eye was blood red.

“You didn’t have to hit him so hard,” Dan said.

“What makes you the expert on how hard to hit a man?” A bayonet dug through Dan’s coat, piercing the skin underneath.

Dan remained silent, but took in what he could. They were in the forest, but it could be anywhere. Light reflected off the ocean far in the distance. The wagon seemed to be well made and not some crimper’s holding pen. The leader wore a sword and pistol, but carried no rifle. The rest of the men appeared to have fighting knives, but no swords or pistols of any kind. Hooves were visible from under the wagon, and it appeared to be another bay horse pulling the wagon. “How ’bout me? I want to go too, and my friend needs a drink.”

“You can wait until your sister returns to take your place.” The officer rode to a barrel on the back of the wagon, used a dipper then silently offered it to James.

James struggled to his knees and accepted the water. He balanced himself on one hand and his knees as he raised the dipper to return it.

Chains jangled from the edge of the woods as Bonnie returned. The officer told her to help James into the wagon.

“No need for you to go into the forest,” one of the riflemen told Dan. “Shake it out then get back inside double quick now.”

“Good work,” James said. “I checked the brand when I returned the dipper. It’s the brand of Davis LeForge, Earl of Grandelor. Weapons are all new, and they appear to have fresh flints. I’d say they were recently issued.”

“What do you know about this Earl,” Bonnie asked.

James rolled into a sitting position. “He’s the king’s advisor. King Reynard is just a boy. This guy is the ruling power in the land until Reynard is ready.”

“What would he want with us?” Dan asked. “I never even seen the king before.”

“No idea. He wants us for some reason, and he didn’t just send an invitation. Maybe someone accused us of something.”

I hope this little snippet intrigued your readers, and thanks again for having me back.

An honorable man is mistaken for his disreputable father. Now he’s pushed into a political scheme to start a war that will spread across multiple kingdoms. James Cuttler’s fiancé is being held captive to ensure he goes through with the plan.

He soon decides his skills are at sea and procures a ship to wage war upon those who disrupted his simple life. He can’t do it alone, so he recruits a band of cutthroats to help him. But first, they need guns and munitions to outfit the ship properly. Deception and trickery will only get them so far. Eventually, they’re going to have to engage the enemy.

James’ goals aren’t necessarily the same as his crew. It’s a delicate balancing act to collect enough loot to keep his crew happy, while guiding them back to rescue the girl.

Voyage of the Lanternfish is filled with adventure, magic, and monsters. Lots of monsters. Hoist the colors and come along for the ride. 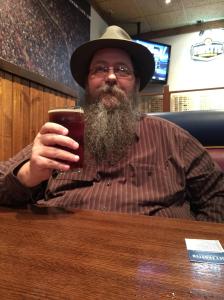 1940s. I’m not quite that old, but Elko has always been a little behind the times. This gives me a unique perspective of earlier times, and other ways of getting by. Some of this bleeds through into my fiction.

I moved to Idaho right after the turn of the century, and never looked back. My writing career was born here, with access to other writers and critique groups I jumped in with both feet.

I like to write about things that have something unusual. My works are in the realm of science fiction, paranormal, and fantasy. The goal is to entertain you for a few hours. I hope you enjoy the ride.